A 'social' gene in fish could contain new clues to autism

A mutation in a gene called EGR1 snuffs out a social behavior in zebrafish, researchers in the UO's Institute of Neuroscience show in a new study. 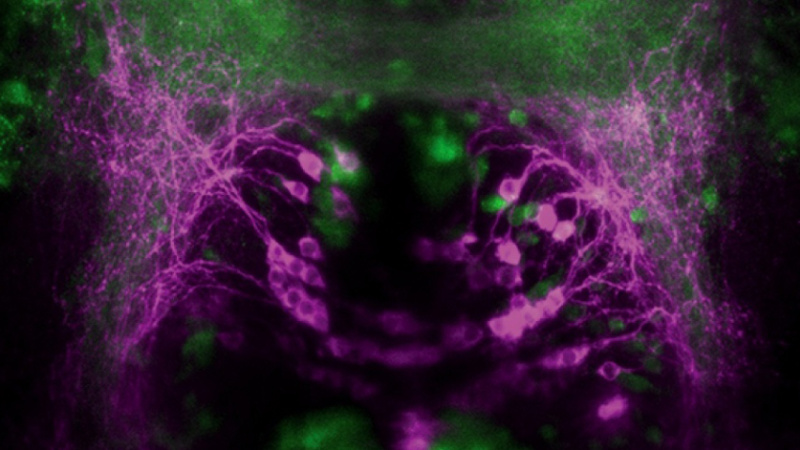 Zebrafish are social creatures. When they see another member of their species, they’ll orient towards them and swim closer, much like a human at a cocktail party turning to face someone who’s telling a joke over a plate of hors d’oeuvres.

A mutation in a gene called EGR1 snuffs out this social behavior in zebrafish, researchers in the UO's Institute of Neuroscience show in a new study. And it disrupts dopamine signaling from certain neurons in the brain, which can affect mood and social behavior.

In humans, mutations in the EGR1 gene have been linked to mental health conditions like schizophrenia and depression, and they also appear to play a role in autism. So understanding more about how this gene shapes social behavior could help researchers unravel the biological basis for a number of complex conditions that have strong social components.

The team, led by UO biology professors Philip Washbourne and Judith Eisen, reports their findings in a paper published April 6 in the journal eNeuro.

To test the effects of EGR1, the researchers put pairs of zebrafish in adjacent tanks. Fish could see each other but couldn’t sense any water movement or chemical signals from their neighboring fish.

Fish with normally functioning EGR1 tended to swim closer to the barrier and orient towards the other fish when it approached, the researchers found. But fish with a mutation in both copies of the EGR1 gene didn’t show particular interest in their piscine neighbor. They didn’t get as close, and they didn’t position themselves towards the glass in the same way.

The researchers also measured the fish’s response to moving dots that shift and dart like shadows of another fish. As they had in the first experiments, zebrafish with normal EGR1 responded socially to those dots as if they were another fish. Fish with the mutated gene didn’t.

“This is giving a small piece of the brain circuits involved in social behavior,” Washbourne said. “From there, we can go upstream and downstream and try to put the circuit together.”

For instance, the EGR1 gene controls a gene that makes tyrosine hydroxylase, a chemical that the body needs to make dopamine. Fish with the EGR1 mutation make less of this chemical in certain neurons in one part of their brain.

Without as much tyrosine hydroxylase, there’s less dopamine, too. So a domino effect started by one gene can send ripple effects through circuits in the brain that affect mood and social behavior.

Social behavior is far more complex than one gene or brain circuit, but Eisen and Washbourne see value in looking at the most basic social behaviors in that way. The neurons they studied are in a brain region that exists not just in humans but also in many other animals with much simpler brains.

Human brains layer more complexity on top of a basic ground plan that’s shared across the brains of many species, Eisen said.

“You can look at these brain regions in other animals where the cortex is not as complex as in humans and learn a great deal,” she said.

For example, here, researchers linked EGR1 to one specific social behavior in zebrafish: following another fish. In mice or humans, that same gene, and the related brain circuits, might direct a different social behavior.

“Different species can use the same cells to take on different social tasks,” Washbourne said.