UO Instructor, Coach, and Women's Intercollegiate Athletics Director from 1965 to 2004 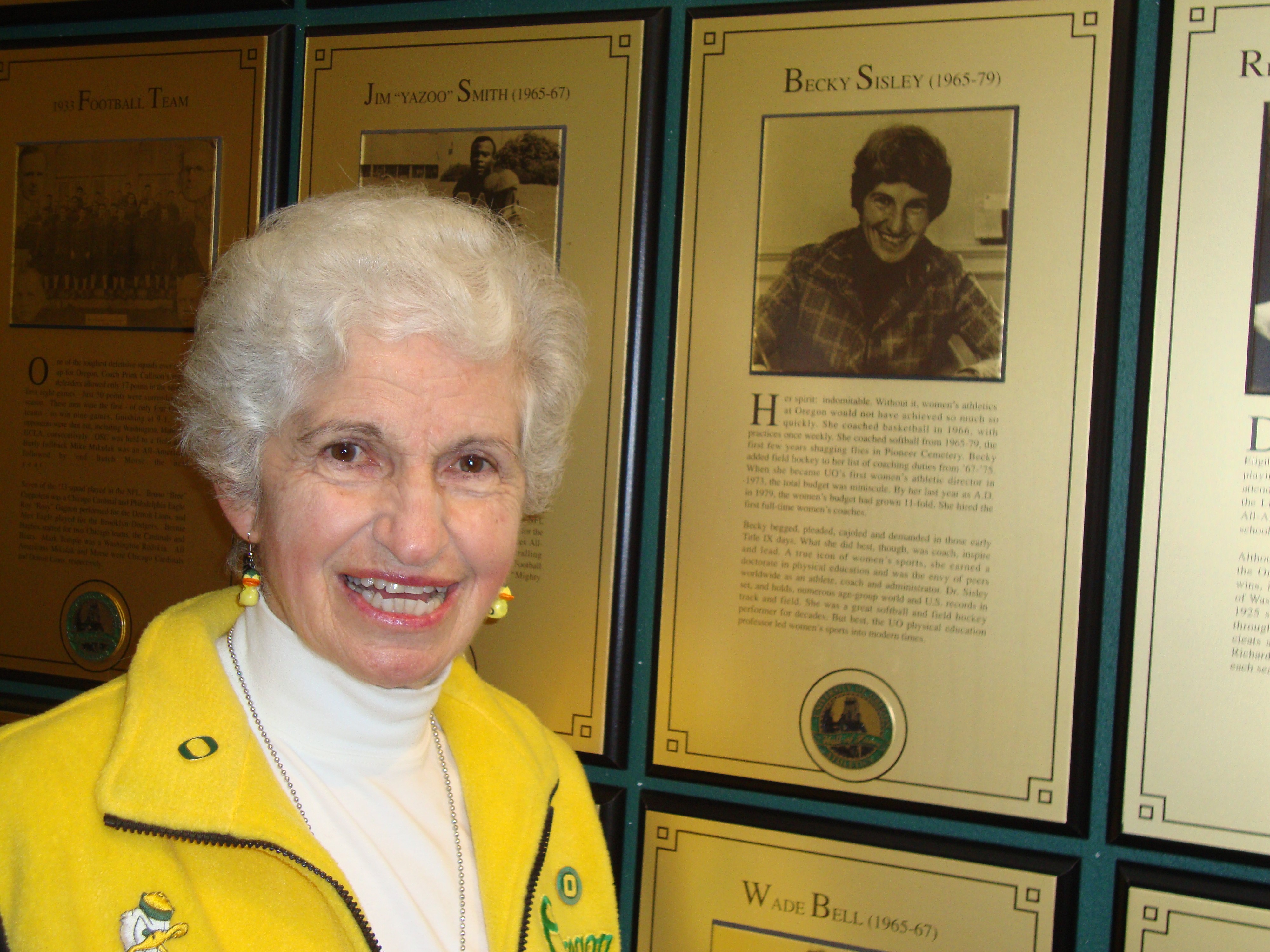 When did you work at the UO and what did you do?

I was also an “advisor” for women’s interest group athletic teams; this was before we had official intercollegiate sports for women. Then the Northwest College Women’s Sports Association was formed. It wasn’t called an “intercollegiate” sports conference; the women in charge didn’t like this word; it was too overpowering.

In 1973, UO President William Boyd created the position of women’s intercollegiate athletics director, so that was when I added that role, and I was also coaching softball and coaching field hockey at the same time.

I was the one and only Women’s Intercollegiate Athletics Director at the UO. A majority of my time and energy was related to Title IX compliance, for which I employed positive communication skills and had to be a good listener. When I retired from that position in 1979, the person who assumed that position was called a Deputy Athletics Director.

I formally retired in 2000, but I stayed on to teach a freshman seminar and I also developed an upper division graduate course about women’s sports and gender equity. The courses were about advocacy, the law, the importance of equity, and the history of inequity. I completely retired in 2004.

Tell us more about your own athletic career and what you do for fun.

Field hockey was the one sport when I was in college where you had a uniform and you had a coach. Field hockey was different. Men didn’t understand field hockey; it was a women’s sport….Ladies…coming from England...that is what I played in college. We made our own uniforms.

Earlier, when I was in high school in Seattle, I started playing softball in the city, and northwest league, and when I was a senior in college (at the University of Washington), I joined the Portland Erv Lind Florists team because they were doing a nationwide tour. The summers after teaching a year at a Kirkland, Washington, high school, and getting my master’s at UNC-Greensboro, and two years at the University of Wisconsin-Madison, I joined the team in Portland. We won the World Championship in ’64 and then I stayed and played with them for one more year. And I played a few years on the Eugene team.

I played club field hockey in Eugene and in Madison, Wisconsin. Club teams held a regional conference where selected players were chosen to represent the region at Nationals. I went to two nationals in field hockey.

In 1989 the World Masters Athletics Track and Field came to Eugene and that got my husband and me excited about competing in track and field. I started track when I was 49.  I traveled all over the world: Russia, Finland, South Africa, Great Britain. I started competing with long jump, triple jump, high jump, and javelin - because of my softball, I was good at javelin. And then when I saw the heptathlon when the World Games were here in Eugene, I decided to add the heptathlon, which is seven events. So I had to learn how to hurdle, put the shot, and run the 800. I added the pole vault when I was 55 years old. I won seven medals at the world meet in Finland when I was 70 years old. I competed for two more years. A highlight of my track experience was competing in Moscow in August 1991 (three weeks before the coup).

These days I to go to the gym three times a week for weights and cardio and so forth. Plus I walk my dog, Sochi, twice a day.

Was there an experience offered by UO that opened your eyes to something new?

When working on Title IX compliance, I had an opportunity to deal with the higher level administration and I can remember an incident. I was in the foyer of Johnson Hall and (UO) President (William) Boyd saw me and said, “How are you doing?” and I said, “Well things aren’t going too well with Title IX compliance,” and I ended up having a meeting with five men in the Vice President’s office and had to yell and scream about what we needed. At first VP Ray Hawk said, “You don’t need drinking fountains; you don’t need a back on your bench!” I said, “Listen, I’ve played in a World Champion softball team and I know what we need!” I took the president on a tour of the facilities so he could see what we had in Gerlinger Annex, and the fields, and what kind of facilities were used by women at that time, which were pretty darn bad. I explained how the male athletic trainer had to pass through the women’s PE major locker room to get to the makeshift athletic training area in a walled-off portion of the shower room. And we still didn’t have a softball field; we finally got a field in 1979.

What was the number one skill you believe you acquired while at UO?

I learned how to be a good communicator, to listen, to have key points in mind that I was trying to get across, and be skillful at communicating back and forth. I learned to respond properly and effectively to what was being told to me and then have accurate information to support what I was saying. If you are trying to advocate for something, you’ve got to have some facts, opinions, resources that can support what you’re advocating for. I had graphs of differences in expenditures in men’s and women’s sports and different institutions. That was part of being prepared to present the case.

What was something that challenged your way of thinking while at UO?

Well, perhaps it was that I needed to deal differently with these male administrators – they weren’t the general public. They had their views and there was probably bias because they were ill-informed, so you had to find a way to get points across and you had to be diplomatic. You couldn’t be an "irate forceful woman" – you had to be diplomatic, eloquent, and gracious and, say “thank you for listening” or, “I appreciate you.”

First of all, I like the campus; the visual appeal of the campus, the grounds, the construction of new buildings, the new dorms.

Secondly, I’m very supportive of President Schill. I think he’s doing a great job; I like the communications that he sends out about what’s going on with campus - the Knight Campus, or new positions like the graduate school realignment and so forth. I see him at the women’s basketball games and I say hi to him. We’ve become fans together – it has been nice. And then, when I saw in the paper in early summer, that he’d gotten a dog, then I communicated with him about my dog and shared a picture of my dog – it was a nice connection. He’s human and a good communicator, and I think he’s done a fine job in the leadership of our institution.

Finally, the UO is a central point for the Eugene area for providing support for things related to COVID, how the UO is trying to be effective in supporting students. I’m proud of the kind of representation the UO has in the community.

What does the word “advocacy” mean to you?

It’s about promoting understanding and being positive. It’s not about fighting or pushing. It’s about being graceful in communication. It means that you’re a good listener and there’s good two-way communication between those who want to advocate for something and those in power.

What advice would you give people advocating for the UO about being an effective advocate?

I think one of the big things is being a good listener – you have to gauge the response of the person you’re communicating with and then choose the best way to respond back. So, in other words, you’re taking into account that person as an individual and his or her feelings and thoughts.

What is something you wish people knew about the advocacy process?

I’d say that it’s a two-way street, and the two-way street has be open on each end so that you can get your points across, you can hear other people’s points, and you can evaluate them and not have a closed mind.

Share an example or two of a time you felt successful advocating for something important to you.

Title IX passed in 1972 ,and finally in 1975 the regulations to implement the law were presented.

With Title IX compliance, we had to make comparisons with the men’s program. One example is uniforms. When women student-athletes finally got uniforms, three teams shared them – volleyball, basketball, and softball. And when the volleyball team qualified for the first ever national tournament and the tournament was in February – where were their uniforms? On the basketball team! We had to share these examples to move women’s sports towards having what was rightfully due to them compared what the men already had.

I still keep in touch with quite a few of my athletes from that era. One keeps talking about having to sell bottles and raise money to get to go to the first national volleyball collegiate championships. And about how they had to make their own uniforms. We finally did get uniforms for each team – it gradually happened, but we had to advocate for equitable benefits gracefully.

Another example was my fight to get the softball field. That was quite a long, tedious process. It finally happened in 1979.

Before we played softball at Howe Field (the location of the current Jane Sanders Stadium) the first softball diamond was located at the southern end of the Hayward Field. But before that, we played on the cemetery field and here’s a great story. The area was south of the Knight Library, north of the School of Music and Dance, and west of the cemetery – so there was this open field next to where visitors would park their cars by the College of Education and then walk parallel to the cemetery going North (like down the third baseline) to get to wherever they were going on campus. When a foul ball would go into the cemetery and there were people walking from their cars, I’d yell, “Help! Help!” One time the person walking by was then-Governor Tom McCall! I could’ve yelled, “Hey! Where’s our softball field?”

I advised the softball intramural sports when I first came to Oregon in ’65 for a couple years. Some the games were played on Gerlinger Field. It’s a rectangular field hockey field, so it doesn’t have really a right field; the right field area is in the cemetery. So we had a ground rule; if it was fair and up to a certain tree in the cemetery, it was a triple, and if it was past the tree it was a home run. I told this to a good buddy of mine, “of course it was a dead ball when it went up there.” This is just another example of the inequities of why we were fighting to get a decent field.