For the second year in a row a University of Oregon chemistry professor has been awarded a national prize for groundbreaking research and innovative teaching. 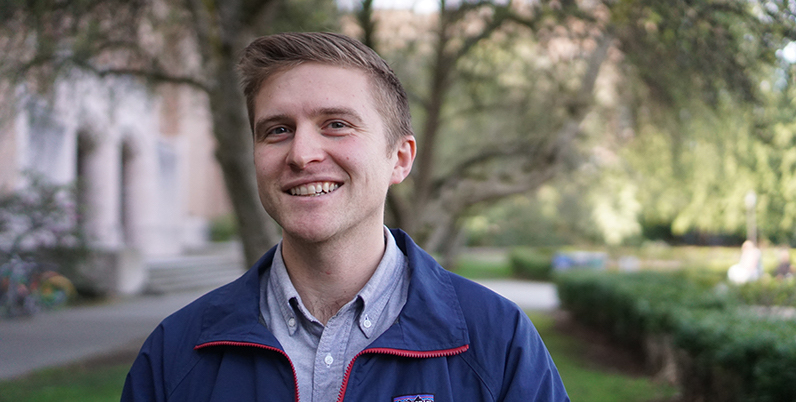 This article first appeared in Around the O on February 24th, 2022.

For the second year in a row a University of Oregon chemistry professor has been awarded a national prize for groundbreaking research and innovative teaching.

Carl Brozek, an assistant professor in the Department of Chemistry and Biochemistry, was named a 2022 Cottrell Scholar by the Research Corporation for Science Advancement for his lab’s research in water purification and his practical teaching methods.

The Research Corporation for Scientific Advancement is a philanthropic organization and distributes the Cottrell Scholar Award every year. The award recognizes outstanding academics for the quality and innovation of their research programs and academic leadership skills.

Brozek was one of 24 early-career scholars selected for the 2022 award based on a two-part proposal, one part teaching and the other part research. In 2021, a fellow UO chemistry assistant professor and colleague of Brozek’s, Christopher Hendon, was named a Cottrell Scholar for his now famous coffee lab, a project that uses elaborate coffee brewing to illustrate the scientific process.

Brozek will receive $100,000 over three years for his research and will present his proposals at the annual Cottrell Scholar Conference this July in Tuscon, Arizona.

The research portion of his proposal deals with improving efficiency in water purification using tiny, porous crystals. By adjusting their properties and shrinking them down to tiny, nano-sized particles, Brozek and his students hope to fine-tune the crystals, called “metal organic frameworks,” so they can be used to filter out different types of water impurities, such as salt, bacteria or heavy metals.

In most modern water treatment systems, each impurity filter requires a separate, expensive process. But by integrating the crystals into a single mechanism, the researchers could help improve the cost efficiency of water purification systems worldwide.

“These materials are really tunable,” Brozek said. “You can control what they’re made of. So you can make one that's really good at grabbing calcium or mercury but that’s also good at letting other ions in that we want in our water, like fluoride or potassium.”

The teaching portion of Brozek’s proposal grew out of a graduate-level workshop he teaches with Hendon. The class is called Journal Club, and through it, Hendon and Brozek teach first-year grad students all the skills needed for a scientific career beyond the science itself.

That includes everything from graphic design, coding basics and writing skills to crafting an effective PowerPoint presentation and communicating scientific ideas through written and visual means.

After years of teaching the course, Brozek realized it’s more effective to teach the skills to students during the final years of their undergraduate degree so they can enter a graduate program fully prepared.

“The target is really undergraduate seniors,” Brozek said, “When an undergrad goes to grad school, or even a career in the industry, having these skills would really help them in that next stage of life.”

Like Journal Club, the new undergraduate class will be structured as a workshop and will begin meeting in the fall, Brozek said.

The workshops could also provide an opportunity for students from underrepresented minority backgrounds to break into fields they may otherwise feel excluded from. Being proficient in skills that many of their peers lack could quicken students’ development as scientists and help give them the confidence boost they need for successful careers, Brozek said.

“I think just the feeling of realizing they know how to do Python or they’re good with Adobe Illustrator or they’re good at writing — it’s going to really help their chance of success,” he said.