Romance languages instructor and doctoral candidate Comesha Tweede was selected to participate in the NEH-funded project. 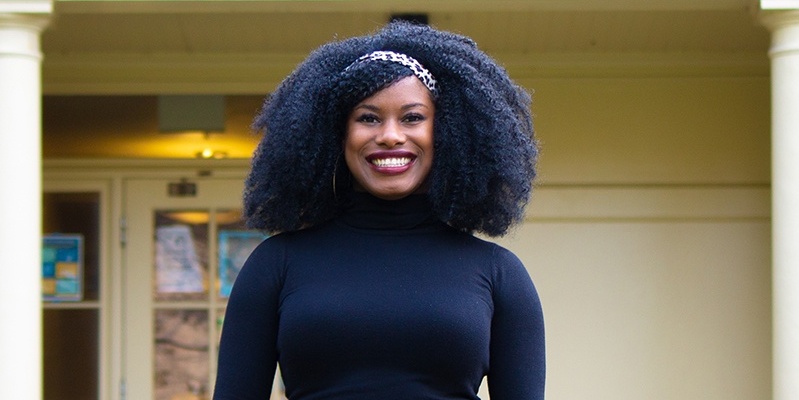 This article first appeared in Around the O on November 8, 2021.

Comesha Tweede, an instructor and doctoral candidate in the Department of Romance Languages, was recently selected to participate in a project funded by the National Endowment for the Humanities.

Tweede, who studies Spanish literature, will be working alongside co-principal investigators Nicholas Jones, assistant professor of Spanish at the University of California, Davis, and Elizabeth Wright, professor of Spanish literature at University of Georgia. The project, which received a $96,347 grant from the NEH, traces the influence of the African Diaspora on theater in the Iberian Peninsula between the years 1400 and 1800.

Jones and Wright recruited Tweede for her previous work on perceptions of Blackness in Spanish society and asked her to participate in a two-day conference in New York City in April 2022. They also are working with her to publish the researchers’ findings in a peer-reviewed journal on Spanish literature the following year.

During the conference, to be held at New York University’s King Juan Carlos I Center, Tweede will host a roundtable and lead a panel where she’ll present ideas on how to teach the concept of Blackness in college classrooms, with a focus on introducing students to the analysis of literary texts through the lens of blackness.

“It’s giving students a foundation, a context in order to understand what Blackness is,” Tweede said. “Not in a way that's going to become this white savior-type complex, but in a way that's productive in understanding the nature of Blackness and how to use it to analyze texts in a rigorous way.”

The project examines the representation of Black Africans, many of whom were descendants of slaves or forced laborers brought to Europe against their will, in works of Spanish and Portuguese theater. Characters scripted as Black were often played by white actors in blackface, Tweede said. They were generally portrayed as caricatures based on racist stereotypes that prevailed in European society during that time.

“There were certain guidelines on how to represent a Black character, specifically within theater,” she said. “And that’s why Black characters were known for their buffoon-like behavior and animal-like traits.”

Black characters were written as the butts of other characters’ jokes and cast into negative or secondary roles like maids, servants and criminals, and their dialogue often consisted of a broken dialect of Spanish or Portuguese, Tweede said, casting their accents as inferior to the “proper” way of speaking of their European counterparts.

But the racist legacy of this discrimination extends beyond the plays. Tweede said scholarly analysis of Iberian theater in the following centuries generally overlooks Black characters, dismissing them as peripheral with little significance to the overarching work.

“There’s a memory there that needs to be unlocked,” she said. “Now, as we bring these characters forward, we see that they have so much significance.”

The list of academics researching this era of Iberian theater in the context of Blackness is small, with Tweede and her co-investigators on the project among only a handful worldwide. But Tweede hopes the visibility from the NEH grant and the resulting conference will provide a new window into the fields of Iberian and African studies and humanize people who have historically been voiceless.

“We’re trying to bring these characters alive, yes,” Tweede said. “But it’s also important to understand the way it relates to real people and real communities … real things that occurred that we need to discuss within the humanities.”