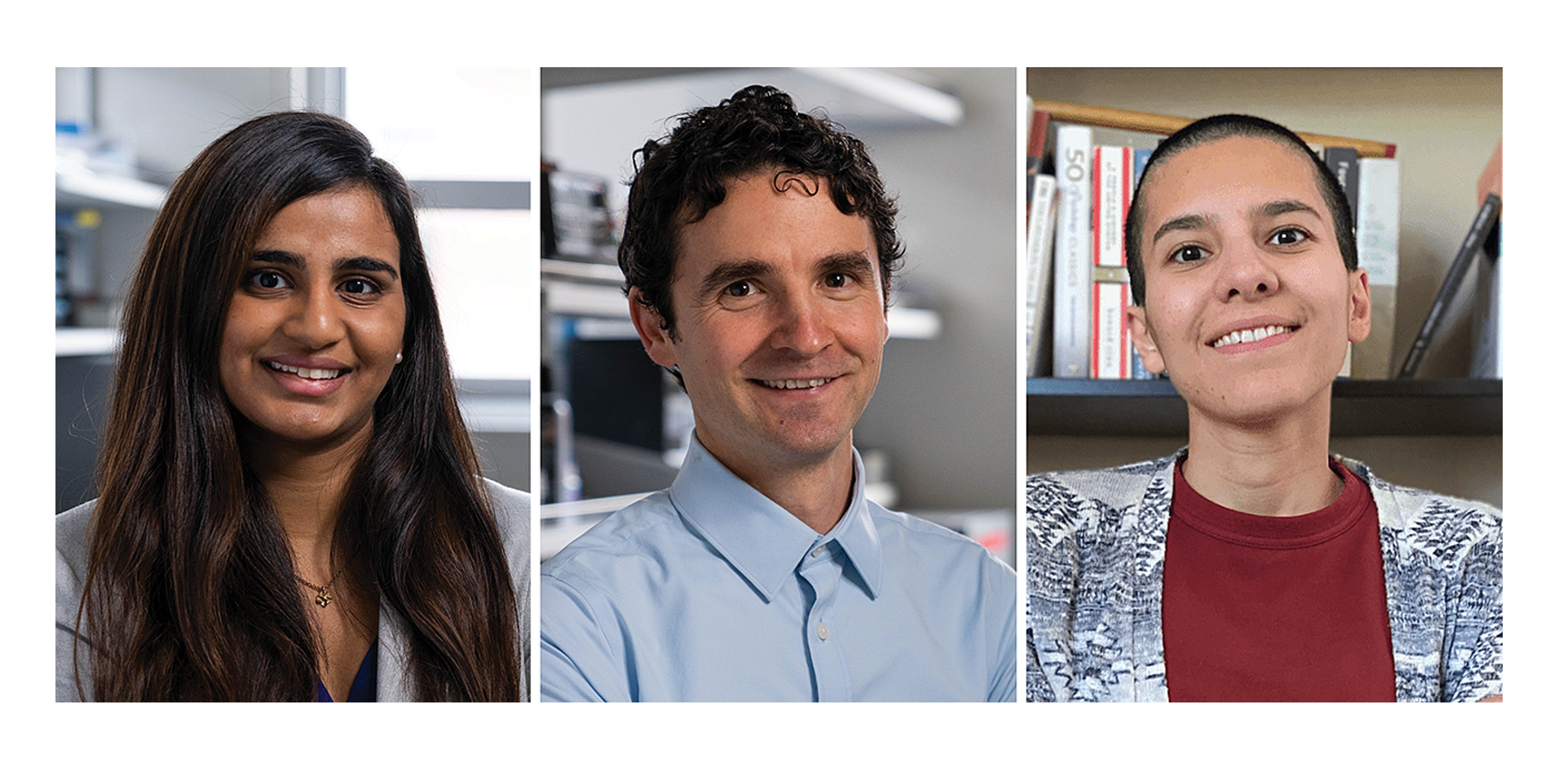 This article first appeared in Around the O on October 19, 2021.

Computational biochemist, Parisa Hosseinzadeh and synthetic biologist Calin Plesa are among a select group of  investigators to be recognized for their highly innovative biomedical research with grants awarded through the 2021 National Institutes of Health’s Director’s New Innovator Awards program. Additionally, bioengineer Marian Hettiaratchi was recognized for her research of high interest to the National Institute of Biomedical Imaging and Bioengineering. All three investigators serve as assistant professors at the University of Oregon’s Phil and Penny Knight Campus for Accelerating Scientific Impact.

Hosseinzadeh’s NIH project is focused on generating peptides — small chains of amino acids, the building blocks of proteins — as powerful, novel therapeutics Peptides can address some of the limitations of the most widely used therapeutic modalities, antibodies and small molecules, and could be the solution to fighting diseases such as cancer, new pandemics, and antibiotic-resistance.

“The dataset generated during this work and methods we develop will be an important resource for many researchers interested in drug discovery, physics-based models of permeability, and will pave the way for the development of next generation cell-permeable peptide therapeutics.,” Hosseinzadeh said.

Plesa’s NIH project addresses the growing need for antibodies for both basic research and therapeutics. Currently there are major limitations in the availability of antibodies and our ability to develop new antibodies. This research aims to create a platform for generating and testing antibodies for every protein present in an organism, around 20,000 in humans. It promises to be an order-of-magnitude improvement over current high-throughput methods of generating antibodies, which are slow, laborious, require automation, and are dependent on antigen availability.

“Successful completion of this work will provide a treasure trove of sequence-verified, high-specificity antibodies, and binding proteins,” Plesa said. “Given the ubiquitous nature of antibody reagents, this research could have a significant impact on broad areas of basic and clinical research.”

Hettiaratchi’s NIH project addresses the issue of treating severe injuries that often result in impaired tissue regeneration. She is seeking to generate a biomaterial platform to enable the precise delivery of multiple proteins from a single material. This ability will allow researchers to investigate the timing of protein delivery for healing. Because this biomaterial can be easily adapted to different types of proteins and tissue injuries, it has the potential to enhance repair in many different tissues.

“Proteins are important in every system in the body. Our objective is to create biomaterials that can locally deliver proteins to sites of injuries with high precision to accelerate tissue repair,” Hettiaratchi said.

Hosseinzadeh and Plesa received grants through the NIH Director’s New Innovator Award. Established in 2007, it supports unusually innovative research from early career investigators who are within 10 years of their final degree or clinical residency and have not yet received a research project grant or equivalent NIH grant. The awards are part of the High-Risk, High-Reward Research program, which supports exceptionally creative scientists pursuing highly innovative research with the potential for broad impact in biomedical, behavioral, or social sciences within the NIH mission.

Hettiaratchi’s grant through the NIH Trailblazer R21 Award program provides an opportunity for new and early-stage Investigators to pursue research programs of high interest to the National Institute of Biomedical Imaging and Bioengineering at the interface of the life sciences with engineering and the physical sciences. Trailblazer projects may be exploratory, developmental, proof of concept, or high risk-high impact, and may be technology design-directed, discovery-driven, or hypothesis-driven and applicants must propose research approaches for which there are minimal or no preliminary data.

"We’ve attracted top faculty talent to the Knight Campus and our early career investigators have been especially successful in their research proposals,” said Robert Guldberg, UO vice president and the Robert and Leona DeArmond Executive Director of the Knight Campus. “We congratulate Parisa, Marian and Calin on receiving these prestigious awards, which illustrate their talent and dedication and speak volumes about the remarkable energy and momentum we have in the Knight Campus.”