The little fish swimming in the outlet where the Eugene millrace flows into the Willamette River are in for a bit of a shock on this brisk spring morning. 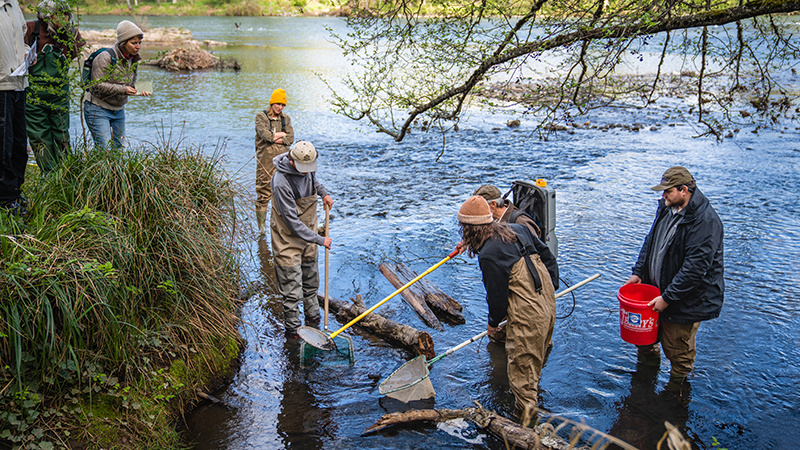 This article first appeared in Around the O on April 18th, 2022.

The little fish swimming in the outlet where the Eugene millrace flows into the Willamette River are in for a bit of a shock on this brisk spring morning.

A state fisheries biologist wades in and drops an electrified rod into the water, briefly stunning nearby fish and bringing them to the surface. Three UO students trail close behind, using nets to scoop up the momentarily immobilized creatures and dumping them into a five-gallon bucket.

Back on dry land, the fish are identified and measured and dumped back into the water. They find a mix of native and nonnative species: northern pikeminnow, sculpin, East Coast pumpkin seed sunfish, and three-spine stickleback are among the fish found in the first sampling.

This census of the fish population in the millrace outfall will help inform a new management plan that will guide restoration of the Willamette River Natural Area on the north side of the UO, where campus meets the river.

The natural area includes a 200-foot setback from the river for nearly a mile, totaling 24 acres, set aside for its riparian natural values and for recreation and education purposes, said Steve Mital, sustainability director in the Office of Sustainability, part of Campus Planning and Facilities Management.

“We don’t have anything like this, any part of our landscape set aside in this kind of way,” Mital said.

A consultant is working with the UO to develop the landscape management plan to help restore the land within the setback to its “pre-settlement condition,” he said.

The Eugene millrace was dug in the 1850s as an engine for early industry, its waters powering saw mills and flour mills before the advent of electricity.

By the early 1900s, the channel became a popular recreation spot, particularly for UO students who swam in and paddled its waters. An evening parade, known as the canoe fete, was a hugely popular campus tradition for decades.

“We’re now in the process of realizing its third life, for its natural values,” Mital said.

The spot where the millrace flows back into the Willamette is just west of Frohnmayer Bridge and east of the Eugene Water & Electric Board complex. During storms, when the river is flowing high and fast, juvenile salmon and other species will duck into such off-channel habitat, Mital said.

On this Friday morning, Jeff Ziller, district fish biologist with the Oregon Department of Fish and Wildlife, is organizing the census. He puts on waders and pulls on a Smith-Root LR-24 Electrofish backpack. The unit generates 350 to 400 volts at low amperage. The electricity is enough to stun the fish long enough for them to be caught, identified and measured.

Most of the fish captured in the census turn out to be native species, Mital said.

A group of students from different majors and departments are there to help out. They pull on waders and nets and follow Ziller as he slowly moves up the millrace outflow.

Kyla Schmitt, a first-year student majoring in environmental studies, was among the students wading into the stream, net in hand. She said she loved the experience.

“It’s been incredible,” she said. “I love field work, it’s amazing. This is what I’m here for.”