Marine biology major is among this year's Goldwater Scholars

Jenna Travers pursuit of a marine biology degree is getting a boost from a Goldwater Foundation scholarship, named for former U.S. Sen. Barry Goldwater of Arizona. 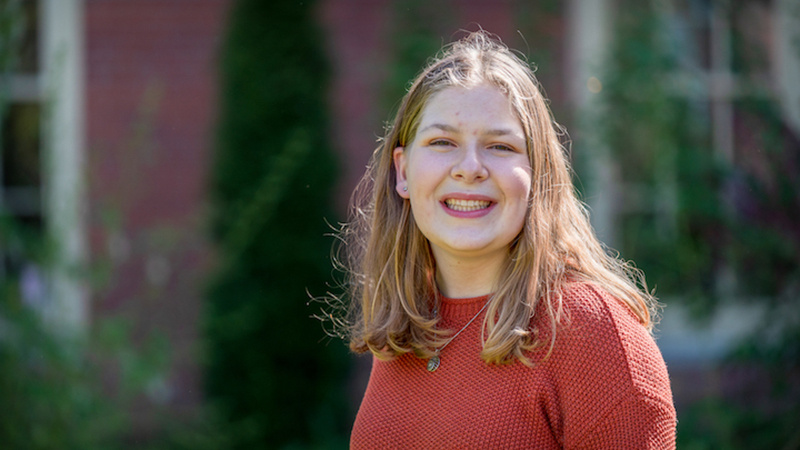 This article first appeared in Around the O on May 16th, 2022

Spending part of her childhood in coastal Alaska, thanks to her father’s work in the U.S. Coast Guard, ignited a lifelong interest in glaciers and salmon. She spent three years each in Sitka and Juneau before relocating to Astoria.

Now her pursuit of a marine biology degree is getting a boost from a Goldwater Foundation scholarship, named for former U.S. Sen. Barry Goldwater of Arizona. The foundation awards undergraduate scholarships of up to $7,500 to sophomores and juniors who intend to pursue research careers in the natural sciences, mathematics or engineering.

This year’s 417 winners of the Goldwater scholarship came from a pool of 1,242 students who were nominated by 433 institutions.

Travers, a junior in the Clark Honors College, is looking at the nexus of climate change and how public policy shapes issues for salmon in the Pacific Northwest.

“I’m looking not only at how glacier retreat will affect salmon populations but also how both glacier retreat and the resulting salmon declines will impact communities that rely on these resources,” said Travers, who graduates in 2023.

“My thesis, which I’m defending this month, focuses on the science communication of this issue,” she said. “So I’m looking at how the overlapping climate issues of glacier retreat and salmon decline are framed by different stakeholders and how that might affect public perceptions of the issues, reactions to policy and willingness to partake in climate action.”

When she first got to the UO, Travers thought she’d go into environmental law. But she soon realized that she wanted to work on marine biology research to shape law and policy rather than becoming an environmental attorney.

“I really missed my STEM classes from high school, so I switched majors to marine biology and added a legal studies minor,” she said. “Without strong environmental policies like NEPA (the National Environmental Policy Act) and the Clean Air and Clean Water Acts, the courts would be completely unable to address environmental issues.”

The marine biology major also is pursuing three minors, in legal studies, science communication and geography. That kind of cross-disciplinary work is supported by the Environment Initiative, an effort to encourage experiential learning and research in multiple departments and colleges to find solutions to climate change and environmental issues.

“Coming from Astoria and growing up in fishing towns in Alaska, I really want to work on fisheries and salmon management and restoration, so that’s my goal for the future,” Travers said. “Many populations in the Pacific Northwest are in crisis, facing extinction, and salmon are incredibly vital to the economy, ecosystems and culture of the region.”

She hopes the science communication minor will help her create more community-focused management strategies that include stakeholders in conservation plans that work for everyone.

Travers is gearing up for a summer of hiking glaciers in the North Cascades as part of her studies with the UO’s Glacier Lab. The lab is a diverse group of graduate and undergraduate students researching the societal aspects of glaciers, icebergs and snow worldwide.

This will be Travers’ first chance to get out on glaciers, which was previously stalled because of COVID-19.

“I’m going to do field work this summer and get to not only hike on glaciers but also measure their retreat and other characteristics about them, so I'm really excited for that,” she said.

For more information and support with distinguished scholarships, visit the UO Office of Distinguished Scholarships or email [email protected].