This year marks the 60th anniversary of the founding of the Peace Corps and we’re celebrating by telling the stories of 14 alumni who made significant differences, learned valuable lessons, and changed for the better during their time in the Corps. 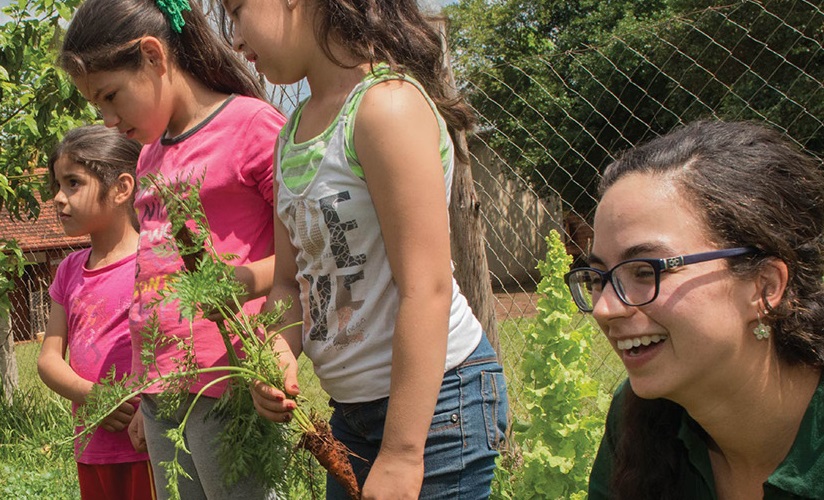 This year marks the 60th anniversary of the founding of the Peace Corps and we’re celebrating by telling the stories of 14 alumni who made significant differences, learned valuable lessons, and changed for the better during their time in the Corps.

More than 1,300 UO graduates have served in the Corps and are still making an impact in their communities today. Many UO alumni who have gone on to careers in public service work, international affairs, and more say that the Peace Corps gave them the skills to succeed in their work.

Erik English, who graduated in 2009 with degrees in English and anthropology says,

“Many of the skills that I apply on a day-to-day basis are ones that I learned during my time teaching English as a foreign language in Klouékanmè, Benin, the values of patience, determination, and creativity being at the top of the list.. These values have helped me problem-solve, overcome bureaucratic hurdles, and maintain an upbeat attitude through it all.”

The Peace Corps is regarded by many as “the hardest job you’ll ever love.” Here’s what alumni have to say about why they joined and why you may want to consider joining, too.

Audrey Bader, the regional recruiter for Peace Corps in Oregon says that volunteers come from a multitude of backgrounds and experiences. She notes that while volunteers must be at least 18 years old to apply there is no upper age limit, and that ages range between 20-86.

“Older volunteers bring more professional and lived experiences to service, and their depth of knowledge can be an invaluable resource not only to their communities but to their fellow volunteers as well,” Bader says. “The various professional benefits offered to Returned Volunteers, including federal hiring advantages, can make Peace Corps service a great way to grow or transition in a career.”

While all of the alumni volunteers say that their time in the Peace Corps was definitive for them, many of our alumni Peace Corps volunteers admit that their service was not easy, and there were many barriers that they had to overcome. Everything from language barriers to poor living conditions—and no salary are enough to keep many from signing up.

It is true that volunteers do receive a stipend each month for room, board, and few essentials, Peace Corps notes that it is only “enough to be at a level sufficient only to maintain health and basic needs. Men and women will be expected to work and live alongside the nationals of the country in which they are stationed—doing the same work, eating the same food, talking the same language.”

From Peace Corps to the Foreign Service

Although volunteers in the Peace Corps service for two years, many find that is a springboard that launches their career in foreign service. Those who service as volunteers can work as diplomats after taking the Foreign Service Officer Test (FSOT). Victor Tomseth, BA ’63 (history), is a former American Diplomat and US Ambassador to Laos. He says that serving at an all-boys school in Nepal led to an almost 30-year career in foreign service.

“Being an Oregonian born and bred, had someone asked me before going to Nepal if I might be interested in a foreign service career, I probably would have replied, ‘Did you mean the Forest Service?,” says Tomseth who was the Deputy Chief of Mission in Tehran, Iran and among the Americans taken hostage by the Iranians from 1979 to 1981. “In Nepal, on the other hand, both our ambassador and his deputy were very active in encouraging volunteers to consider foreign service careers.”

Sarah Wardwell, BA ’05 (biology), is an alumna who went into the Foreign Service after the Peace Corps. She has represented the US in Indonesia and the Dominican Republic and currently works for the Bureau of Consular Affairs as a US diplomat. She says that her service in Papua New Guinea ended abruptly because the country became unstable politically, but that her time there changed her life drastically.

“As a direct result of my Peace Corps experiences, I have focused on cross-cultural communication and managing projects and programs throughout my career,” Wardwell says.

Bao Le, BA ’01 (history), is yet another alumnus who found himself working as a diplomat after his service in the Peace Corps. He did two tours: one in Burkina Faso, West Africa and the other in Chad. He says that he wanted to “explore the world, gain new experiences, and serve a disadvantaged community” but didn’t know how transformative his experiences in the Corps would truly be.

“Looking back, joining the Peace Corps was one of the best decisions for me . . . even today, as a diplomat working on international security issues at the US Embassy Seoul, I believe that serving in the Peace Corps is like executing diplomacy at the grassroots level, but without a hidden agenda,” says Le.

Changing lives the world over

Heidi Laws, MEd ’13 (educational leadership) says that her passion for education was cemented in the Corps while serving in Honduras. “We trained teachers in special education and invited students that had never stepped foot in a school. The school is still in existence 30 years later with a focus on teaching special education.” Today, Laws continues to reach students globally as the Head of Student Support Services at The International School of Kenya.

Another alum who has worked abroad since serving in the Corps is Ken Gulick, MA ’98 (international studies), MBA ’98 (general business). Gulick served in Fiji where he was asked to be the principal for a summer school program where 30 Corps members taught over 200 local students for two weeks.

“We helped give students a boost in their math, physics, biology, and chemistry studies and they were so appreciative of the opportunity to learn,” Gulick says. “It made the effort highly rewarding.”

Today, Gulick now lives and works in Luxembourg as the Commercial Director of Pan European Pensions at Fidelity International.

The Peace Corps does extensive training with volunteers so that when they go into host countries they are prepared to learn about themselves and others.

The Cross-cultural handbook instructs volunteers in the following: “Just as you want to learn another language so that you can communicate with local people and understand the new world around you, you also will want to learn the silent language of cultures—your own and your host country.”

When thinking back on her experience, Eickmeyer says that she was confronted by the lack of understanding about the role the United States has played globally.

"If volunteers really allow themselves to listen and learn from their communities, it cancels the myth of American exceptionalism and creates space for more cultural humility and authentic human connection,” Eickmeyer says.

Boileau says that he was inspired by President Kennedy’s idealism and wanted to serve others, – but gained more by learning from Koreans. Looking back on his experience, Boileau believes that the Peace Corps gives people “a life-long change in your international perspective as well as your human perspective about the “other. ”