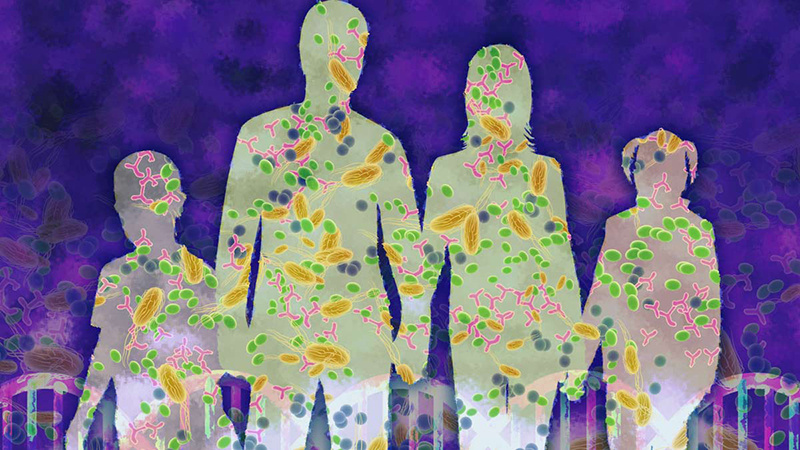 This article first appeared in Around the O on November 4th, 2022.

To learn to socialize, zebrafish need to trust their gut.

The researchers also found that these “social” neurons are similar in zebrafish and mice. That suggests the findings might translate between species and could possibly point the way to treatments for a range of neurodevelopmental conditions.

“This is a big step forward,” said UO neuroscientist Judith Eisen, who co-led the work with neuroscientist Philip Washbourne. “It also sheds light on things that are going on in larger, furrier animals.”

The team reports their findings in two new papers, published in PLOS Biology and BMC Genomics.

While social behavior is a complex phenomenon involving many parts of the brain, Washbourne’s lab previously identified a set of neurons in the zebrafish brain that are required for one particular kind of social interaction. Normally, if two zebrafish see each other through a glass partition, they’ll approach each other and swim side by side. But zebrafish without these neurons don’t show interest.

Here, the team found a pathway linking microbes in the gut to those neurons in the brain. In healthy fish, gut microbes spurred cells called microglia to prune back extra links between neurons.

Pruning is a normal part of healthy brain development. Like clutter on a counter, extra neural connections can get in the way of the ones that really matter, resulting in muddled messages.

In zebrafish without those gut microbes, the pruning didn’t happen, and the fish showed social deficits.

“We've known for a while that the microbiome influences a lot of things during development,” Washbourne said. “But there hasn't been a lot of concrete data about how the microbiome is influencing the brain. We've done quite a bit to push the boundary there.”

In a second paper, the team identified two defining features of that set of social neurons that may be shared by mice and zebrafish. One is that those cells could be identified by having similar genes turned on, a clue that they might serve similar roles in the brains of both species.

Such signature signs could be used to identify neurons that serve that role in different brains. The other is that “neurons with the same gene signature in mice are in approximately the same brain locations as the zebrafish social neurons,” Eisen said.

That finding strengthens the researchers’ belief that their work in zebrafish could translate to mice or humans. It’s easier to study the nuts and bolts of brain development in zebrafish, where scientists can watch neural circuits form through the young fish’s transparent bodies. Researchers could then take the insights from zebrafish and use them as a starting place for understanding other species.

Both gut microbiome disruption and poor neural synapse pruning have been linked to a range of neuropsychiatric conditions like autism spectrum disorder.

“If we can tie these together, it might facilitate better therapeutics for a wide range of disorders,” said Joseph Bruckner, a postdoctoral researcher in the Eisen and Washbourne labs and the first author on the PLOS Biology paper.

His next step is figuring out what molecules are linking the bacteria to the microglia, mapping the pathway between microbes and behavior in even more detail.

The research was funded in part by the Gordon and Betty Moore Foundation, via a grant to Judith Eisen under the foundation’s Symbiosis in Aquatic Systems Initiative.