A zebrafish study has led UO professors to new findings about gut health. 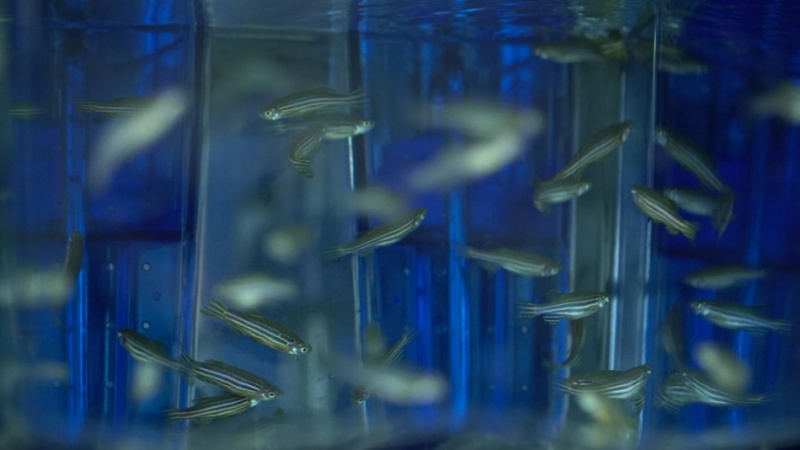 This article first appeared in Around the O on February 14th, 2022

Sometimes, a gut feeling is literal.

Nerves in the intestines help regulate the gut’s acidity, new research shows, and that helps keep their bacterial communities in balance.

“We found an unexpected connection between the nervous system of the intestine and the community of gut microbes,” said UO microbiologist Karen Guillemin. “The nervous system is regulating the microbes.”

Guillemin co-led the new work with Judith Eisen, a neuroscientist at the UO. They published their findings Feb. 1 in the journal PLOS Pathogens.

Scientists have known for years that gut bacteria are important for digestive health. And other studies have demonstrated a strong connection between the gut and the brain. The new work links those two mostly distinct areas of research together.

To make the connection, Eisen and Guillemin studied zebrafish with a genetic mutation that leads to missing nerves in the gut. In humans, mutations in this gene are associated with Hirschsprung’s disease, which disrupts gut nervous system development and can cause bouts of severe intestinal inflammation.

Eisen and Guillemin had previously shown that zebrafish missing gut nerves had similar inflammation. But understanding the roots of inflammation can be tricky because so many factors, from diet and exercise to genetics, can affect gut health. And one kind of inflammation often fuels other inflammation, making it tough to figure out where the cycle begins.

“Many conditions can cause intestinal inflammation, and it’s very difficult to sort out in people,” Eisen said. “In zebrafish, you can do really controlled manipulations,” including controlling what kind of bacteria are present in their intestines at birth.

Postdoctoral researcher Kristi Hamilton came in with a hunch: She suspected that the diseased zebrafish might have problems with their gut pH. Sure enough, when she fed zebrafish larvae acid-sensing dyes, the ones with missing gut nerves had more acidic guts. That, in turn, led to overgrowth of harmful vibrio bacteria.

Giving the fish a heartburn drug called omeprazole, widely known as Prilosec, calmed down the acidity and restored the bacterial balance. On the other hand, giving zebrafish a drug that increases acidity — acetazolamide, used for altitude sickness, epilepsy and many other conditions — had the opposite effect, they found. It led to too many vibrio bacteria in zebrafish with previously healthy guts.

The findings suggest that the nerves in the gut do more than control the contractions that keep things moving; they also help regulate gut acidity, ensuring a healthy bacterial population. For the researchers, following their intuition paid off with a new understanding of what it means to have a good gut feeling.