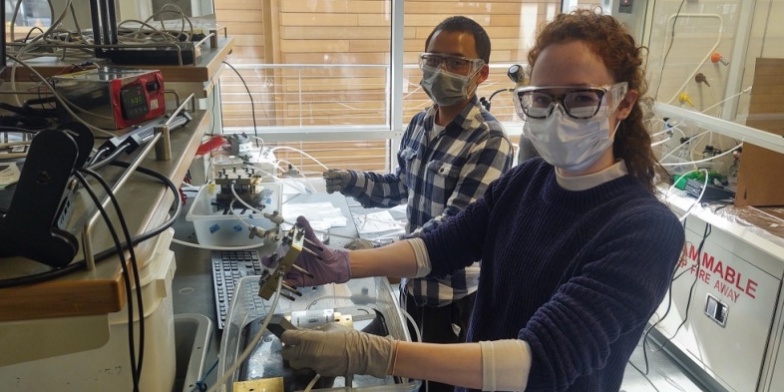 This article was first published in Around the O on October 14, 2021.

Shannon Boettcher, professor of chemistry and biochemistry, received a $400,000, two-year grant from the U.S. Department of Energy to develop a way to capture and recycle the carbon dioxide produced during the fermentation process that turns biomass into renewable diesel and sustainable aviation fuel.

The effort is part of a program led by the National Renewable Energy Laboratory, a leading research lab in the U.S., and Boettcher’s team will be working with DeNora, a company specializing in electrode and water technologies.

The production of biofuel involves bacteria and sugar coming together inside a bioreactor, where they are fermented. The end product is a sustainable fuel alternative known as biofuel. During the fermentation process, some carbon dioxide is emitted into the atmosphere as a byproduct.

Boettcher’s goal is to build an electrolyzer that captures the emitted carbon dioxide and reduces it into formate, a chemical that promotes the fermentation of sugar in the bioreactor. That would create a closed-loop biofuel production process and eliminate CO2 emissions into the atmosphere.

“In order to make the processes of converting the emitted CO2 back into formate, we are using bipolar membranes,” Boettcher said. “These are a key advance and a large part of the research program here at the UO.”

In order to make the formate, protons and electrons are added to the captured CO2 using electricity produced by the sun and wind. The formate can then be added back into the process of biofuel production.

“Even clean energy processes do often generate some carbon dioxide as a side proxy, so this in principle improves the carbon efficiency of the overall biofuel process,” Boettcher said. “That’s the idea, and the question is whether it will work in an integrated system. That’s what we’re exploring through this grant.”

Boettcher will be joined by a postdoctoral researcher and a doctoral student as they continue research already happening at the UO as part of the Oregon Center for Electrochemistry, a nation-leading effort to integrate scientific research, innovation and education with sustainable energy technologies.

The state-of-the-art bipolar membranes Boettcher’s team believes could streamline the CO2 reduction process are an advance they have been working on for the last three years at the UO. The key advances were reported in Science in 2020 by postdoctoral scholar Sebastian Oener, working under Boettcher.

“The team will be working on applying our previous discoveries to a potentially high-impact technology, while at the same time testing to see whether our fundamental understanding of these processes is correct,” Boettcher said. “This information will then feed directly back into our basic science efforts here at the UO, creating a constructive loop and allowing us to do better basic science.”

Boettcher has also received an additional grant of $3 million from the Department of Defense, leading a team of scientists across the UO, Stanford University, Northwestern University and Penn State University, to study similar bipolar membranes for building other types of water electrolyzers that run on impure seawater. The team is exploring how bipolar membrane electrolyzer systems work and how to improve their efficiency.

“This grant brings in resources to explore some applications that simultaneously synergize with our own basic science efforts to understand how these systems work” Boettcher said. “And if these applications do work, then it speeds up the adoption of the science, and that directly impacts the world. We’re a part of a global effort to reach lower emissions, and that’s really impactful. At the end of the day, what’s important is the knowledge we gained having some impact on humanity. That’s always the end goal.”