This article first appeared in The Register Guard on July 15. 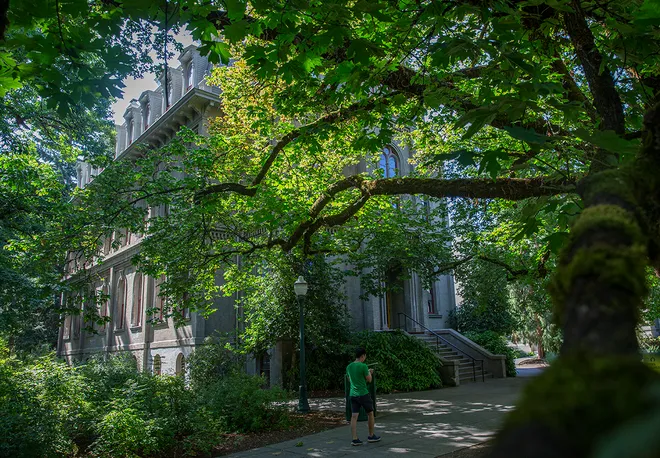 Two founding, historical buildings on the University of Oregon's campus will get a facelift with new money allocated by state lawmakers this legislative session.

University Hall (formerly named Deady Hall) and Villard Hall are UO's two founding buildings and more than 150 years old, according to an announcement on UO's website. Together, these two halls make up one of 17 National Historic Landmarks in Oregon.

Because of their age, UO requested the state fund renovations to the halls to meet Americans with Disabilities Act standards, improve the heating and cooling systems, and make them seismically safe and more modern.

UO is calling the improvement The Heritage Renovation Project. The bill by the Oregon Legislature also appropriated bond funds to 15 other colleges and universities for capital projects.

"The UO requested $58.5 million to renovate University and Villard halls, the university’s two founding buildings. These buildings are designated National Historic Landmarks, and we are thankful the state approved funding for these renovations and funds to cover the issuance of bonds," UO spokesperson Kay Jarvis said. "The total projected cost of the project is $64.35 million. The funding model for this project requires the university to provide a minimum match of 10% of the state’s contribution. For the Heritage Renovation Project, the university’s contribution is $5.85 million."

These two buildings are notorious among UO students and faculty for being antiquated. University Hall, for instance, has an elevator which is frequently broken or unable to be used.

Two faculty members testified to the need for upgrades in letters submitted to lawmakers.

"As a professor who ‘lived’ and taught extensively in University Hall, I’m intimately familiar with the need for renovations to this building," wrote Hal Sadofsky, the divisional dean for Natural Sciences.

He mentioned the "huge temperature fluctuations" and lack of energy efficiency that comes from having an outdated heating system and no cooling.

"We teach and work in summer, too, and I’ve seen sensitive students simply have to leave third-floor classrooms in spring and summer when temperatures on that floor went into the 90s," he wrote. "A few years ago, a faculty member walked into their office to discover their whiteboard shattered due to the high temperature."

Other issues Sadofsky identified were the lack of accessibility for all students and needed seismic, fire and safety upgrades.

"Funding for this project would provide these life-saving renovations and ensure that future generations are able to experience the birthplace of public higher education in Oregon," he wrote.

Theresa May, associate professor and director of graduate studies for Theatre Arts, also submitted a letter encouraging lawmakers to fund the project.

"Our students deserve to learn, grow and hone their acting abilities in an accessible, safe facility," May wrote. "Villard Hall, like University Hall, is not currently accessible for all students. Doorways lack adequate height and necessary width for ADA accessibility. The narrow, tight spaces and ADA inaccessibility is consistent throughout Villard and University halls, in stairways, bathrooms, elevators and lobby spaces."

Villard Hall houses the UO's theater arts program, and May noted the program hopes to host in-person performances again in the near future, and without renovations, doing so would be inviting them to "attend performances in a severely seismically deficient building."

"As an actress, I am well-versed in creating illusions, but it is difficult to suspend disbelief in a space that is dangerous for our faculty, staff and students," May wrote.

Construction is expected to begin in early 2023 with the projects expected to be completed in late 2024, Jarvis said. The plan is to renovate both buildings at the same time, though this has not been planned out in detail yet.

"Our current plan is to find temporary homes for all activities in both buildings," she said. "The objective of every project on campus is to minimize disruptions inherent with any construction project."