The Oregon Impact map is interactive map that tells the story of the University of Oregon’s impact in every Oregon county, legislative district, and congressional district. 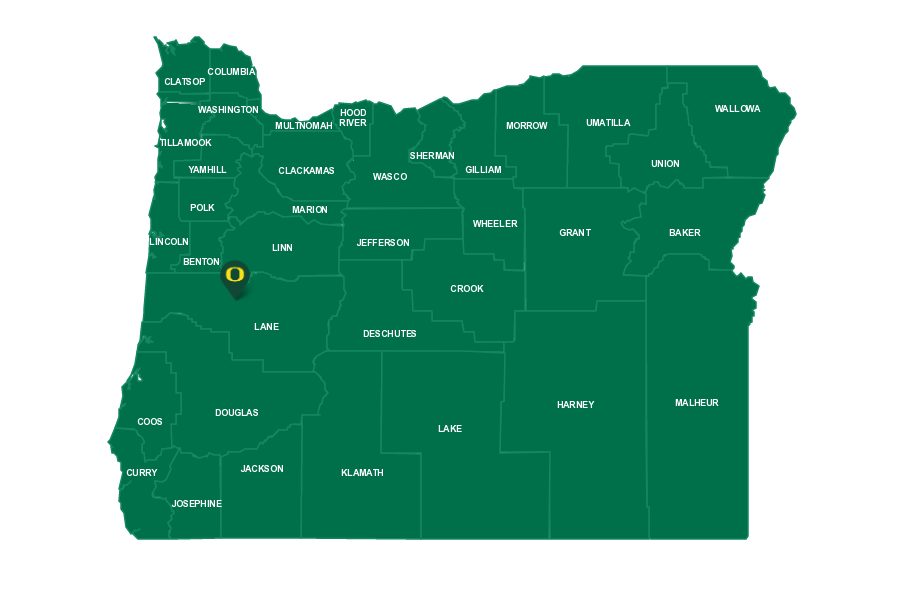 The Oregon Impact map is interactive map that tells the story of the University of Oregon’s impact in every Oregon county, legislative district, and congressional district. The tool displays data about UO students, alumni, and other interesting details in a customized and informative way.

The map has been updated to reflect the impact of the UO in newly adopted congressional and legislative districts in which candidates will be vying in 2022 elections to serve in 2023, including the new 6th Congressional District. A second map displays the UO impact in current districts and counties.

During the FY20-21 academic year, UO students received more than 9,100 financial awards statewide totaling $127 million in federal, state, and institutional financial aid, and the map breaks down these allocations by district and county. Also featured from each jurisdiction is the number of students who receive the Pell Grant, the Oregon Opportunity Grant, and those participating in Pathway Oregon, UO’s program that ensures academically qualified Pell Grant-eligible Oregonians will have their tuition and fees paid through a combination of federal, state and university funds. Statewide in the current FY21-22 academic year, 2,235 students are Pathway Oregon participants.

The map also shows the number of placements over a five-year period of the UO’s Resource Assistance for Rural Environments (RARE) AmeriCorps program. This program, administered through the UO’s Institute for Policy Research and Engagement, is an interdisciplinary institute that assists Oregon communities by providing planning and technical assistance to help solve local issues and improve the quality of life for Oregon residents.

The map also shows by district and county where UO’s 119,000 alumni living in Oregon reside, as well as by jurisdiction the UO spending with local businesses and number UO employees.  Across the state the UO spends $1.1 billion with Oregon businesses.

The Oregon Impact map is a collaboration between the UO Location Innovation Lab, the Department of Geography’s InfoGraphics Lab, the Office of Institutional Research, the Institute for Policy, Research and Engagement, and Government and Community Relations.