2021-22 was a record year for UO innovation disclosures, support for entrepreneurial-minded students and startups, and cultivating new partnerships. 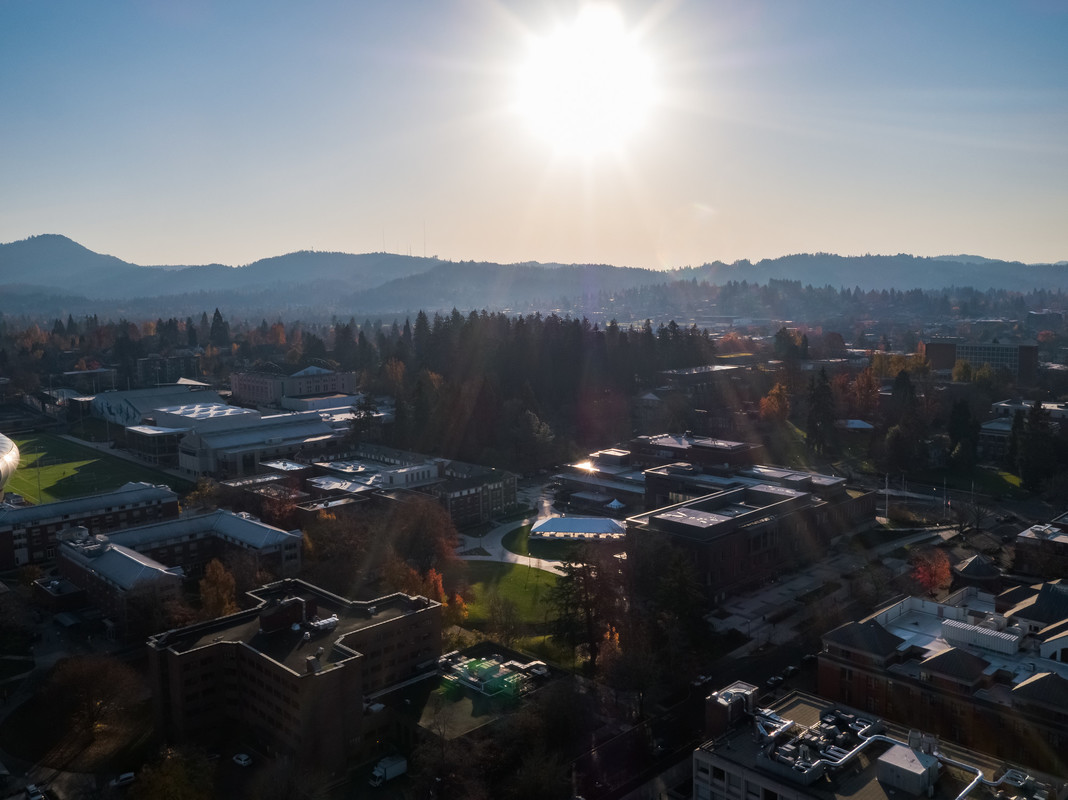 First publihed by UO Office of the Vice President for Research and Innovation, October 31

The impact of University of Oregon innovations stretches far past tree-lined 13th Avenue. In the 2022 fiscal year, from July 2021 through June 2022, there were 13 more disclosures than the previous year, the UO filed for 24 new patents with four issued so far, and UO researchers launched one new company based on university research. That new company, NatureQuant, co-founded by Chris Minson, professor of human physiology, brings the total number of existing startups with formal ties to the university up to 29.

The UO saw a record innovation income of $10.3 million in FY22, 80 percent of which is reinvested right back into the research, education, and outreach projects supported from the UO campus in Eugene. The university ranked first nationally in licensing according to Heartland Forward, a non-partisan, non-profit economic think tank. The UO continues to lead the nation in licensing volume anchored in its successful College of Education assessments and interventions reaching millions of students in tens of thousands of schools.

From startup to industry standard

In early 2022, a UO health care startup launched to improve health outcomes for patients was acquired by Phreesia, a publicly owned company that automates and manages patient intake. Insignia Health, which is still located in Portland and is now a subsidiary of Phreesia, used a copyrighted and trademarked tool known as the Patient Activation Measure (PAM), developed by a team of researchers led by UO professor emerita Judith Hibbard. PAM is considered a standard in the health care industry.

“The Patient Activation Measure is widely viewed as the gold standard of patient activation measures, supported by more than 700 peer-reviewed studies published in leading healthcare journals over the past 17 years,” Phreesia shared in a press release at the time of acquisition.

UO continues to lead the nation for technology transfer

According to Heartland Forward, an institute for economic renewal, in its “Research to Renewal: Advancing University Tech Transfer” report on university innovation around the country, the UO continues to own the top spot for both number of licenses and options executed and the number of licenses and options executed per invention disclosure. Researchers interested in commercialization can apply for grants to help develop their projects through the UO Catalyst Fund to quickly bootstrap great ideas and get critical resources to spinouts on launch. The three funding tiers of the program align with different stages in the innovation and company spinout trajectory.

Contributing to the Oregon innovation index

Another measure of the UO’s impact beyond campus and the immediate community is the university’s contribution to the state’s innovation index.

Every year, Business Oregon releases its Oregon Innovation Index, which was created to measure the state’s innovation economy and identify opportunities for enhancing competitiveness. Oregon’s 2022 innovation score is 69 out of 100, which ranked third in the US and is an improvement over the state’s 2018 score of 66.5. The top scoring state in the 2022 Index was Massachusetts, with California coming in second.

“UO contributes [to the state’s high performance] in a number of areas. The metrics where UO (and other schools) has the most impact is in the categories of translation and innovative environment,” said Mark Brady, an innovation strategist at Business Oregon. “Specific indicators are SBIR awards, university licensing/options, and educational attainment. Entrepreneurs coming from UO contribute to many other indicators as well. Overall, UO is a key partner in the innovation effort. We must work well with UO, other Oregon schools, and many other partners for innovation to work. We can’t get where we want to go unless we’re all supporting each other.”

Brady noted that universities are also core contributors to workforce development throughout the state across a spectrum of industries.

“It’s best to create a supportive environment for all then see what ideas take root,” Brady said.

Expanding a partnership with the Lemelson Foundation

In June, the UO hosted a summit focused on the findings of a Lemelson Foundation-funded collaboration centered on building and strengthening the entrepreneurial ecosystem in Oregon.

Led by UO, the innovation ecosystem project enabled the development of three university-based innovation ecosystems in Oregon, including Portland State University, and the Oregon Institute of Technology in Klamath Falls. The project employed the Strategic Doing™ methodology to help generate innovative solutions for each ecosystem and create an environment where invention and entrepreneurship can thrive.

The innovation ecosystems are meant to serve as economic development hubs, enabling a free flow of knowledge and information between local universities and key stakeholder groups that encourages efficient use of resources. The ultimate goal is to foster equitable economic prosperity by creating new technology companies and high paying jobs.

“The UO continues to lead in innovation management and in creative methods to bring evidence-based education products to our schools and to children in need of assessments, interventions, behavior management, and career support,” said Anshuman “AR” Razdan, vice president for research and innovation. “By all metrics, the university’s growth trajectory for innovation continues to rise, but we are committed to do more as a public university. We plan to launch significant new programs this year to advance ideas that will be translated into spinout ventures. We are excited to innovate tech transfer process itself at the UO.”

— By Kelley Christensen, Office of the Vice President for Research and Innovation