U.S. Sen. Jeff Merkley came to the University of Oregon Friday, Sept. 16, for a roundtable discussion on the growing problem of wildfire smoke in Oregon communities and how academic research and practice can help address the issue. 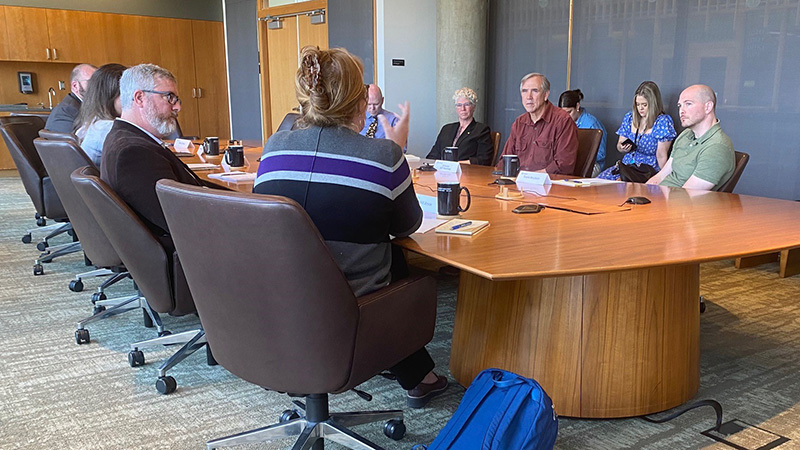 Article first appeared in Around the O on September 19.

U.S. Sen. Jeff Merkley came to the University of Oregon Friday, Sept. 16, for a roundtable discussion on the growing problem of wildfire smoke in Oregon communities and how academic research and practice can help address the issue.

Merkley, an Oregon Democrat and chair of the Senate Interior Appropriations Subcommittee, earmarked $800,000 to the Environmental Protection Agency in March to establish a new Center for Wildfire Smoke Research and Practice at the University of Oregon.

The UO is in the process of applying for the funds and awaiting EPA approval, said Cassandra Moseley, vice provost for academic operations and strategy and a research professor in the Institute for Resilient Organizations, Communities and the Environment. The new center is expected to launch sometime in 2023, she said.

Merkley said local communities have seen their emergency rooms fill up with people whose asthma was aggravated by the inundation of wildfire smoke.

“This is one of the reverberations of climate change,” he said. “Longer fire seasons, worse fires and more smoke.”

Since 2015, he said, the number of unhealthy air days has increased markedly in Oregon communities, from three days a year to 33 in Bend, from 22 to 67 in Klamath Falls, and from 28 to 75 in Medford.

“When you have a new public health issue,” he said, “we need to bring our best knowledge to bear on it.”

Moseley said the center would initially focus on three areas of research: communications, to ensure people are getting high quality, actionable information during smoke and fire events; community planning; and supporting emergency managers in their decision-making.

Communications are often overlooked or taken for granted but are “an essential component to help communities prepare for smoke events,” said Hollie Smith, associate professor of science and communication in the School of Journalism and Communication.

Research has found that community members often get conflicting and inconsistent information during smoke and fire events, such as being advised to stay indoors to avoid unhealthy air, and to get outside and manage the defensible space around their homes, Smith said.

Recently, the Cedar Creek Fire prompted authorities to evacuate the city of Oakridge, both because of the growing wildfire and unhealthy, smoky air. “That’s a messy problem we haven’t been thinking that much about,” Moseley said.

The mission of the new center will be to conduct research driven by community need and to ensure communities get actionable information, Moseley said. The work will be conducted in a “collaborative, engaged way” that builds on the work that local communities, the Oregon Health Authority, Oregon State University and others are already doing, she said.