The University of Oregon is making ground on its goal to become a Hispanic Serving Institution, a federal designation given to universities and colleges with 25 percent or more Hispanic enrollment. 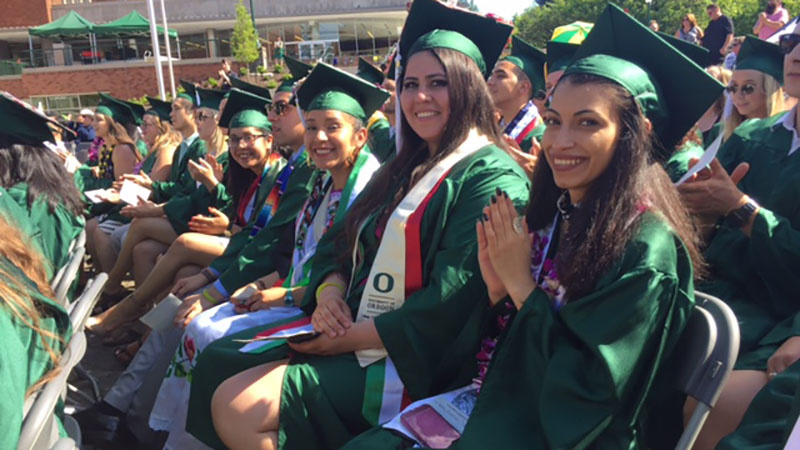 This article first appeared in Around the O on April 19th, 2022.

The University of Oregon is making ground on its goal to become a Hispanic Serving Institution, a federal designation given to universities and colleges with 25 percent or more Hispanic enrollment.

"I am very pleased that the university has taken the first steps to proactively address Latinx enrollment and retention,” said committee chair Laura Pulido. “I very much hope that UO’s commitment will continue in the coming years, as this will not be a quick or easy process and will require significant change as we become an institution that truly serves underrepresented students.”

To accomplish the goal of reaching 25 percent or more Hispanic enrollment, a task force has been created. It assesses the possibility of the university becoming a Hispanic Serving Institution, including documenting enrollment trends and working on the challenges of achieving the designation.

The members of this committee are:

The UO has recently qualified for an “emerging HSI” designation. The status is given to institutions with at least 15 percent Hispanic enrollment. The status allows an institution to become eligible for various forms of support to assist in attaining full status. As of this month, the university’s Latinx undergraduate enrollment is at 15.9 percent.

The task force’s primary objective is to boost the enrollment of Oregon Latinx students. According to a 2016 Oregon Community Foundation report, Oregon’s Latinx population is growing at a rate faster than the national rate: 12 percent of the state’s population is now Latinx, representing 72 percent growth since 2000.

The task force has created two subcommittees to advance its progress toward becoming a Hispanic Serving Institution with a newly launched blog to share its progress. One committee is focused on collecting institutional data to help understand where university enrollment currently stands. The second subcommittee is working to develop a complete picture of the larger landscape of Latinx resources at the UO.

For a real-time look at Latinx enrollment numbers, check out the Office of the Provost’s Analytics Data Dashboard.