A rapidly growing network of technology helps scientists, emergency responders and government agencies detect and monitor wildfires and other hazards. 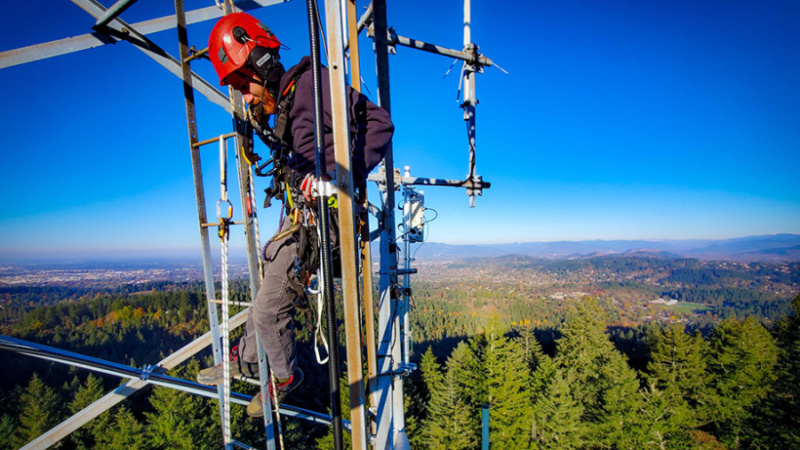 This article first appeared in Around the O on November 21st, 2022

High up in a telecommunications tower on a South Eugene ridge, a climber is barely visible. His bright blue jacket blends in with the sky as he attaches a white microwave dish to the tower’s metal limbs. He’s part of the Oregon Hazards Lab, and today, its team is seizing a break from the usual November gloom to install a new wildfire spotting camera.

This camera is the 32nd in Oregon and the first one in Eugene. It provides a clear view of Eugene and the UO campus. And the microwave dishes mounted alongside the camera are strategically positioned to transmit signals from other fire-spotting cameras in the area.

“We’ve been excited about this site for a while,” said Andrew Hadlock, the Oregon Hazards Lab team lead for wildfire. “It’s been great working with the city of Eugene to get it put in.”

Collectively, the rapidly growing network of technology helps scientists, emergency responders and government agencies detect and monitor wildfires and other hazards. The Oregon Hazards Lab, led by UO professor Doug Toomey, builds and maintains the Oregon portion of the network. They’re part of a multischool consortium called ALERTWildfire, which is placing cameras across the Western United States.

Many of the cameras are installed in remote wilderness where cell service is spotty to nonexistent. So alongside the cameras, the hazards lab mounts microwave dishes and other instruments on the towers, to send the data back to home base.

Slowly, they’re building a new communications network that could be used to share time-sensitive information about wildfires and other natural disasters via dishes that beam microwave messages tower-to-tower. Longer-term, the network will help scientists monitor the changing environment.

The new Eugene site plugs a hole in that network. It creates another path by which data from nearby cameras can travel, so that one downed dish doesn’t throw off the whole network.

“There had been talk of this site in the past because it has a line of sight to other high points,” Toomey said.

Once Toomey’s team started seriously looking into it, it came together quickly. When they first visited the site in August, roped-up climbers scaled the tower to assess the “viewshed” and figure out whether it could fit all the necessary equipment. After that, navigating the permissions from the city of Eugene took a few months. Now, in mid-November, it’s up and running.

“OHAZ is developing the most advanced all-hazards, environmental and ecosystem observing platform in the United States for convergent scientific research that contributes to a more disaster-resilient society,” Toomey said. “Every tower we include in our growing communications and monitoring network is vital to that vision.”