The NASA James Webb Space Telescope has reached its destination a million miles from Earth and is beaming back images of the deepest parts of space and Charity Woodrum, a 2018 University of Oregon alumna, will be among the first to pore over them. 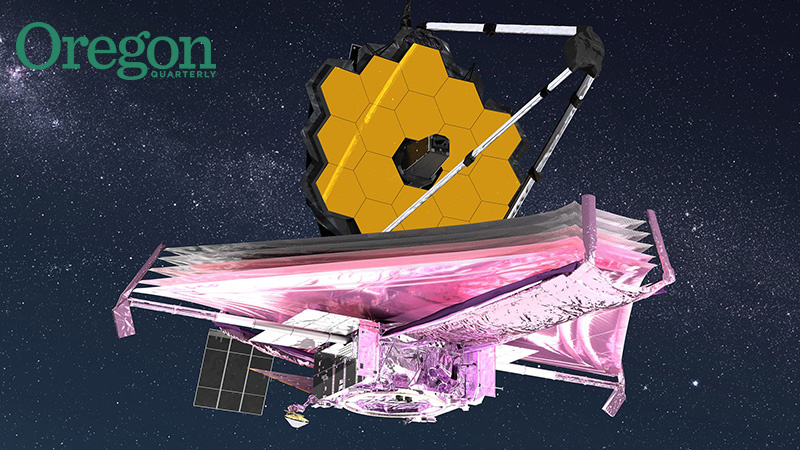 This article first appeared in Around the O on April 6th, 2022.

Now that the NASA James Webb Space Telescope has reached its destination a million miles from Earth and begins beaming back images of the deepest parts of space this summer, Charity Woodrum, a 2018 University of Oregon alumna, will be among the first to pore over them, looking for clues to how our galaxy came to be.

The journey to her current role—pursuing a PhD at the University of Arizona—is a big step toward fulfilling a dream Woodrum has had since she first began at the UO. Her undergraduate research as a Duck led to a prized NASA internship that helped serve as a launchpad for her stellar career, but she’s had to overcome heartbreaking tragedy along the way.

Growing up in rural Douglas County, Woodrum was the first in her family to graduate high school and went on to become a nurse. But the emotional hardships of the job took a toll, and Woodrum eventually decided to change careers and pursue a simmering interest in science.

She enrolled at the UO in 2014 and began studying space. She took advantage of research opportunities with her advisor, astrophysicist Scott Fisher, studying galaxy formation, how to sift through data, and working alongside him at the UO’s Pine Mountain Observatory outside Bend. Woodrum was part of a team that captured one of the first images of an exploding dying star in a galaxy 35 million light years away, and ultimately earned the NASA internship.

But in 2017, while Woodrum and her husband, Jayson Thomas, were walking with their three-year-old son, Woody, on the Oregon Coast, a sneaker wave hit and swept the father and son to sea, where they both drowned.

The tragedy could have derailed Woodrum’s dreams.

“When it first happened, I didn’t know what I was going to do anymore,” Woodrum says. “I decided I wanted to make them proud, which the reason I got into astrophysics in the first place was to make my son proud. And I wanted him to be proud of me when he grew up. I wanted to show him what it looks like to follow your biggest dreams. And I think I accomplished that, and he was proud of me. And so was my husband. And I just decided I wanted to continue making them proud and keep pursuing the dreams that I had thought of when they were with me.”

Woodrum graduated with a degree in physics and headed to Arizona, where she has earned a master’s in astronomy and astrophysics as she works toward her doctorate.

She’s building on the research she tackled with Fisher. “Having that basic foundation in physics from the U of O really helped,” she says. “The biggest thing was getting involved in research as an undergrad, and that wouldn’t have happened without professor Fisher.”

Woodrum will have access to 900 hours of observations from the telescope through her advisor, astronomy professor Marcia Rieke, who developed the Webb telescope’s main camera and has helped drive the project for nearly 30 years. Woodrum will incorporate the information—“the best data that humanity has ever seen,” she says—into her thesis on galaxy formation.

“We don’t know what the first galaxies look like,” Woodrum says. “That’s one of the biggest mysteries in astrophysics right now. Another question I’m hoping to answer with JWST is why some galaxies stop forming stars.”

Thanks to instruments onboard the Webb, Woodrum will study data and images of previously unseen galaxies in the farthest reaches of space. Analysis will tell her the elements in those galaxies’ stars, precisely how far away they are, and even how they are spinning.

Working with her advisor, other faculty, and grad students, Woodrum will string together images from these oldest galaxies with those from the youngest to illustrate galaxy evolution.

“When you look far away,” Woodrum says, “you’re seeing into the past.”

She hopes to finish her PhD in 2023 and to continue working with the telescope as a postdoctoral scholar at the Space Telescope Science Institute in Baltimore. She also has thoughts of returning to the UO someday and joining the physics faculty.

But first up is her work with the Webb telescope.

“We have all of these ideas of what we’re going to see, but one of the most exciting parts is the things we don’t even know to ask yet,” Woodrum says. “As my advisor always points out, there are going to be surprises.”