UO chemist gets grant to study more RNA strands at once

A University of Oregon chemist who is studying RNA structures that carry specific biological functions hopes to translate the findings into advances that will impact all of humanity, such as the COVID vaccine. 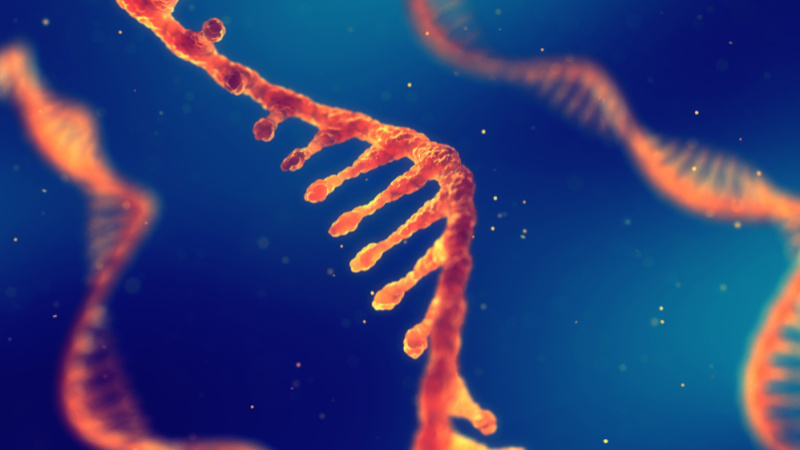 This article first appeared in Around the O on November 7th, 2022

A University of Oregon chemist who is studying RNA structures that carry specific biological functions hopes to translate the findings into advances that will impact all of humanity, such as the COVID vaccine.

Julia Widom, an assistant professor in the Department of Chemistry and Biochemistry in the College of Arts and Sciences, has received a new five-year, $1.8 million Maximizing Investigator’s Research Award from the National Institutes of Health to pursue RNA research.

“RNA is made up of a chain of chemical pieces that can carry information,” Widom said. “Kind of like the letters in a sentence. These chemical pieces also make the molecule fold into specific structures by interacting with each other in different ways, like if a sentence folded back on itself so that the letter Gs stuck to the letter Cs.”

Most people have heard of mRNA vaccines, such as the COVID-19 shots from Pfizer and Moderna. According to Widom, those types of vaccines rely mostly on the information-carrying property of RNA, rather than the structural property.

“For example, some RNAs sense the levels of nutrients in the cell and tell it whether more of a nutrient is needed,” Widom said. “To do this, the nutrient has to fit into the RNA molecule like a key fits into a lock, and the lock has to be the right shape for the key.”

Widom’s lab focuses on the basics of these RNA structures, whereas other labs are focused on how properties of RNA can apply to medicine. Still, it’s not lost on Widom that the knowledge her work produces about RNA structures could one day contribute to a massive advance in public health, as mRNA vaccines have.

One widely used method called fluorescence resonance energy transfer captures the structures of individual RNA molecules using tiny fluorescent molecules. This method is notably powerful because it can reveal rapid changes in an RNA molecule’s structure as it interacts with proteins.

However, while it’s possible to measure the structure of multiple RNA molecules at once, they all must have the same underlying genetic sequence. That limitation prompted Widom to explore other methods.

After teaming up with a company called Seqll, Widom is now using a new technique that allows her to scan multiple sequences at once. Seqll developed specialized chemical reagents that let Widom sequence the RNA.

Widom does her usual single-molecule measurements to monitor the structure of the RNA as it does things like transitioning between different structures and interacting with different proteins. But instead of one at a time, Widom performs it on a variety of sequences.

Seqll was interested enough in Widom’s proposal that it was willing to give Widom the tools for free. Scaling up the technique across the field of biochemistry would be a groundbreaking advance because those kinds of experiments are expensive and labor intensive.

“Now we’ll be able to get anywhere from four to 200 different sequences on our microscope all at the same time,” Widom said.

Tailored for early-career researchers, the NIH grant has the goal of “providing investigators with greater stability and flexibility, thereby enhancing scientific productivity and the chances for important breakthroughs,” according to the NIH website. The program also will “help distribute funding more widely among the nation's highly talented and promising investigators,”

—By McKenzie Days, College of Arts and Sciences