UO neuroscientists look deep into the eyes of the octopus

A team of UO researchers is investigating yet another distinctive feature of this eight-armed marine animal: its outstanding visual capabilities. 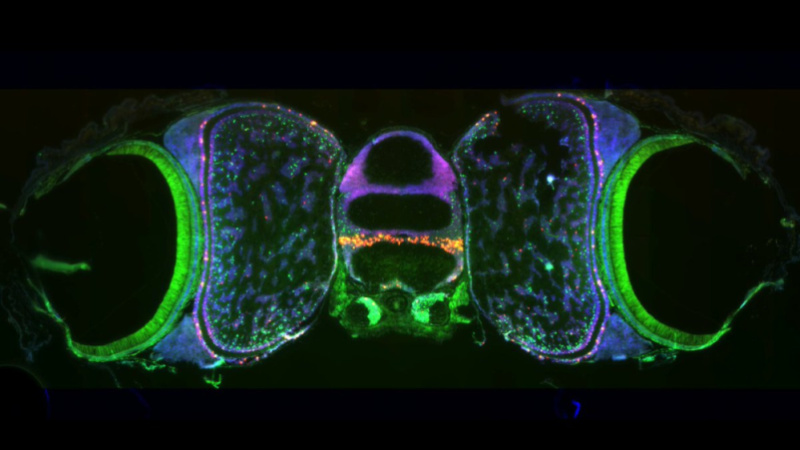 This article first appeared in Around the O on November 9th, 2022

It’s hard for the octopus to pick just one party trick. It swims via jet propulsion, shoots inky chemicals at its foes, and can change its skin within seconds to blend in with its surroundings.

A team of UO researchers is investigating yet another distinctive feature of this eight-armed marine animal: its outstanding visual capabilities.

In a new paper, they lay out a detailed map of the octopus’ visual system, classifying different types of neurons in a part of the brain devoted to vision. The map is a resource for other neuroscientists, giving details that could guide future experiments. And it could teach us something about the evolution of brains and visual systems more broadly, too.

The team reports their findings Oct. 31 in Current Biology.

Associate professor Cris Niell’s lab in the Institute of Neuroscience studies vision, mostly in mice. But a few years ago, postdoctoral researcher Judit Pungor brought a new species to the lab: the California two-spot octopus.

While not traditionally used as a study subject in the lab, the cephalopod quickly captured the interest of UO neuroscientists. Unlike mice, which are not known for having good vision, “octopuses have an amazing visual system, and a large fraction of their brain is dedicated to visual processing,” Niell said. “They have an eye that's remarkably similar to the human eye, but after that, the brain is completely different.

The last common ancestor between octopuses and humans was 500 million years ago, and the species have since evolved in very different contexts. So scientists didn’t know whether the parallels in visual systems extended beyond the eyes, or whether the octopus was instead using completely different kinds of neurons and brain circuits to achieve similar results.

“Seeing how the octopus eye convergently evolved similarly to ours, it’s cool to think about how the octopus visual system could be a model for understanding brain complexity more generally,” said Mea Songco-Casey, a graduate student in Niell’s lab and the first author on the paper. “For example, are there fundamental cell types that are required for this very intelligent, complex brain?”

Here, the team used genetic techniques to identify different types of neurons in the octopus’ optic lobe, the part of the brain that’s devoted to vision.

They picked out six major classes of neurons, distinguished based on the chemical signals they send. Looking at the activity of certain genes in those neurons then revealed further subtypes, providing clues to more specific roles.

In some cases, the researchers pinpointed particular groups of neurons in distinctive spatial arrangements, for instance, a ring of neurons around the optic lobe that all signal using a molecule called octopamine. Fruit flies use this molecule, which is similar to adrenaline, to increase visual processing when the fly is active. So it could perhaps have a similar role in octopuses.

“Now that we know there's this very specific cell type, we can start to go in and figure out what it does,” Niell said.

About a third of the neurons in the data didn’t quite look fully developed. The octopus brain keeps growing and adding new neurons over the animal’s lifespan. These immature neurons, not yet integrated into brain circuits, were a sign of the brain in the process of expanding.

However, the map didn’t reveal sets of neurons that clearly transferred over from humans or other mammalian brains, as the researchers thought it might.

“At the obvious level, the neurons don't map onto each other; they're using different neurotransmitters,” Niell said. “But maybe they're doing the same kinds of computations, just in a different way.”

Digging deeper will also require getting a better handle on cephalopod genetics. Because the octopus hasn’t traditionally been used as a lab animal, many of the tools that are used for precise genetic manipulation in fruit flies or mice don’t yet exist for the octopus, said Gabby Coffing, a graduate student in biology professor Andrew Kern’s lab who worked on the study.

“There are a lot of genes where we have no idea what their function is, because we haven't sequenced the genomes of a lot of cephalopods,” Pungor said. Without genetic data from related species as a point of comparison, it’s harder to deduce the function of particular neurons.

Niell’s team is up for the challenge. They’re now working to map the octopus brain beyond the optic lobe, seeing how some of the genes they focused on in this study show up elsewhere in the brain. They are also recording from neurons in the optic lobe, to determine how they process the visual scene.

In time, their research might make these mysterious marine animals a little less murky — and shine a little light on our own evolution, too.