UO programs bolstered by $16M in Build Back Better funds 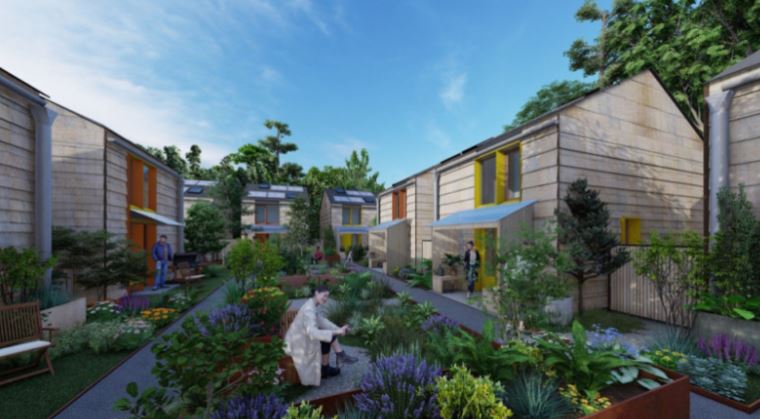 Researchers at the University of Oregon will receive more than $16 million in federal funds as part of a major government grant to the Oregon Mass Timber Coalition from the Build Back Better Regional Challenge.

Researchers at the University of Oregon will receive more than $16 million in federal funds as part of a major government grant to the Oregon Mass Timber Coalition from the Build Back Better Regional Challenge.

The U.S. Department of Commerce’s Economic Development Administration has awarded the coalition a total of $41.4 million, with $24.6 million going to the TallWood Design Institute, a collaboration between the UO and Oregon State University to support Oregon’s mass timber industry. OSU will receive $8 million.

Of the UO funds, $14.6 million will go toward the Oregon Acoustic Research Laboratory and $2 million is destined for affordable housing prototyping using mass timber, an application that uses solid wood panels that are prefabricated using digital workflows. Both programs are part of the College of Design and contribute to the institute.

“The UO and OSU, through the TallWood Design Institute, have been essential to the development of the modern mass timber industry in Oregon through our research and development,” said UO architecture professor Judith Sheine, design director for the institute. “Combined with the funding that will support smart forestry research, a new fire testing facility, and modular mass timber housing testing at OSU, and UO’s acoustic research lab and prototypes for affordable housing and retrofits, we will continue to advance our R&D work into the future to provide benefits for Oregonians.”

“This grant will provide a tremendous lift to the TallWood Design Institute, which already leverages the expertise and collaboration of researchers at the University of Oregon and Oregon State University,” said Patrick Phillips, interim president of the UO. “It will also benefit the entire state of Oregon, driving innovation and helping to increase our housing supply in a sustainable way.”

Over time, the funds will contribute to employment growth in construction, manufacturing and sustainable logging, while helping develop energy- and seismic-resilient mass timber for affordable housing.

“I think we’ve been enormously effective in jumpstarting and advancing these mass timber industries in Oregon, but there’s still a huge amount of work to be done and enormous opportunity,” Sheine said.

Sheine’s research focuses on using mass timber in the construction of affordable housing that provides energy and seismic resilience while sequestering carbon through its use of wood products. The grant will fund prototypes to prove the viability of constructing small, affordable, single-family homes as well as building and retrofitting multistory and multifamily dwellings.

The Oregon Acoustic Research Laboratory will be a world-class, state-of-the-art facility designed for high-performance and high-throughput testing for sound-dampening products and construction methods.

“Floor and ceiling acoustics have become a hurdle to increasing the uptake of mass timber structural systems in multistory, multifamily housing,” said Kevin Van Den Wymelenberg, architecture professor and director of the Institute for Health in the Built Environment. “We’re trying to help mass timber find its way into multistory, multifamily housing and reduce sound transmission between units. And you need to test it before you can build it.”

The laboratory will be the first of its kind at a university in North America and among the most advanced in the world. It will be able to test for low- and high-frequency sound transmission and designed for the needs of both university researchers and private sector testing.

“This will also open opportunities for research and technology transfer both in the mass timber space and acoustics space for the university and our students,” Van Den Wymelenberg said.

The lab, which was approved by the UO Board of Trustees in 2019, would be housed at the Port of Portland’s Terminal 2 site.

The Build Back Better funds are meant to bolster and rejuvenate Oregon’s timber industry, contributing to timber manufacturing job creation in rural counties that have seen employment declines over the past half century. They also will be used to start forest restoration projects to improve resilience, reduce wildfire risk, and provide a sustainable supply for mass timber production.